As we’re already nearing the end of April, this update will talk about “stuff done” in both March and the better part of April (this is excl. the income figures, which are just from March).

Let’s start with an updated rev graph, we almost hit $30k in March, pretty happy with that (April is looking to be less atm).

We’ve got a few things to go through as we’re making some pretty big moves to get this project to the next level… or rather, try and jump a few levels at a time.

As a quick recap, this project targets country-specific keyword clusters, and we prioritised English-speaking countries first, excluding the US due to the intense competition there.

We’ve got 2 countries pretty much where we want them, then bought 2 aged domains to re-build, re-rank, and then merge into the site sections that target country #3, and the US.

Well, the keywords targeting country #3 started ranking on the first page w/o the merge… so who knows how crazy that section will go when we do merge.

And the US… well, we officially merged the aged domain into our site on April 5th!

As we really wanted the full power of the root of the aged domain, we changed the search intent and content of the root to match that of our main money page that targets the US… that way the root could be 301-ed straight into the most valuable page on the site!

It only took 5 days to see significant ranking boosts for our US keywords, and this week (around April 20) we were temporarily on the first page for one of the main keywords… we’re verrrry excited about where this is headed as ranking top 3 in the US, in this niche, would be quite profitable :).

With the country strategy working so well, we’d be crazy not to push this as far as we can, so we expanded into an additional 6 countries, making the total 10 countries now.

The new additions are non-English speaking, from Russia to Japan, we analysed the top ones for our niche, re-wrote the content to match the countries, then got it all translated and pushed it live… the next few months are going to be very interesting!

I’m going to stop showing graphs per country, too many countries… so here’s an overall snapshot from Accuranker showing %-splits of ranking positions over the 345 kws we’re currently tracking. 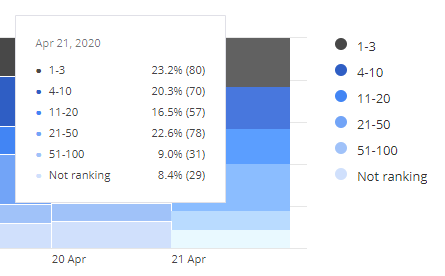 It’s all looking quite promising, see you in the next update!